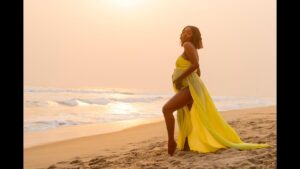 n the 16th of April, Simi dropped her single “Duduke” alongside the music video and it recently hit over 15 million streams across all music platforms.

The track sparked a challenge that trended for quite a while.

The song which was produced by Oscar, directed by Adasa Cookley now Simi is giving us a look at all that went down behind the scenes.

I’ve debated with myself for months on whether or not I should document my personal experience as a working, pregnant woman. I still haven’t decided, because I’m still trying to navigate my current chemistry with social media.

I’ll say this though, making this song was special for me, because it was personal, but I honestly had no idea it would be as huge as it is. I didn’t know it would resonate with so many people. For that I’m thankful. God is great. And I’m thankful he brought you to me❣️- So until I conclude my debate,