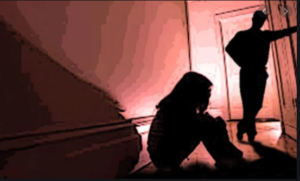 I was to attend a burial ceremony along with Toyin that Saturday. I left home very early to beat the
traffic that normally builds up on Saturdays because of weddings and other events.
I made my way back home because I forgot the gift we planned to present to Mrs Victoria, our friend who lost her father. On
reaching home, I was shocked to notice the central door was locked. Why will Kassim and his sister lock
themselves up less than an hour after I left home? Or have they both gone out? Non of them mentioned
any plan of an outing this morning. I became curious why the door was locked but I remembered I had
my spare keys in my bag.
I quickly opened my bag and brought out my bunch of keys and got the central
door opened.
In a jiffy I was in our bedroom but no sign of Kassim in there. I headed to the guest room and what I
saw left me in shocked and dumbfounded.
Kassim, my own husband was molesting his own biological sister right in our house. The poor girl was
struggling under him and begging him not to do it to her again. I stood there for over a minute before
my husband could realize I was around.
I felt like stabbing him to death but there was no any object I
could use around. When he realised I had been standing for sometimes watching them, he tried to put
on his boxer as he begged me to understand that it was not what I think. I couldn’t open my mouth to
say anything, my lips were heavier than rock, my tears were ticker than usual. I ran back to our bedroom
and picked few of my things and ran out of the house. He didn’t stop me because of fear of what I could
do.
I headed straight to Toyin’s place and she was angry I came late. She noticed I didn’t reply everything
she said and she came out from her room to check why I was mute. What are you doing with this box?
She asked looking at my face, then realized I was weeping. She came close and hugged me to her chest, what happened Nneka? She asked me calmly.
Then a battle arose in my mind on what to tell Toyin. Toyin can’t withstand the bad news but what will I
tell her if I don’t tell her the truth? Toyin will surely get Kassim arrested if she knows the truth. While I
laid on her chest my mind traveled so far planning suitable lie I will tell my friend. You know I am your
friend and you can confide in me, tell me what happened, Toyin begged me. I want to sleep, I want to be
left alone now, I pleaded with Toyin.
She walked me to the children’s room and helped me to the bed.
She looked round the room and removed every harmful objects that I could use in harming myself and
went away with them. Ten minutes later she came to check on me but I was still awake sobbing.
She peeped and whispered, “don’t kill yourself, I am here for you”. That day we couldn’t go for that burial
ceremony again.
I began to connect happenings since Ope came to our house. How she was lively and became moody
suddenly. The statement I over heard from Ope ” brother, so you have not stopped this evil”, the
hostility, the isolation etc.
Was this the evil Ope was referring to that day? Was she hostile to her
brother because he has done this to her before? Why was she locking herself up even when we were at
home? Why was my mother-in-law always calling to ask after Ope almost everyday since she came?
These thoughts began to tear my head apart. I was practically losing my mind and I know it’s time to
confide in Toyin before I run mad.
Why should I even leave the house without addressing this evil and
abomination committed by my husband? I will go back and face Kassim point blank, let him explain to
me what just happened now. I wished all these were dreams.
But I need a witness, I will go with Toyin, I made up my mind. At about 4pm I called Toyin, dress up, we
are going to my house together, I said. Within five minutes she was ready. I left my things in her house
because I knew I will come back. I can’t sleep under the same roof with the beast.
The journey to the revelation to the abomination that caged my marriage for ten years has just began.
Read Previous Episode Here

Please come back for Episode 5.