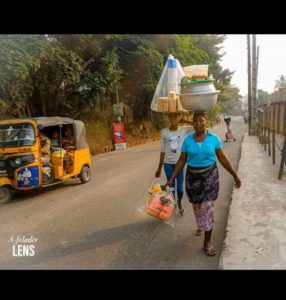 To make it FAR in Life, we all need Support and when we get that support from people, we should do what it takes to optimise it, expand it & receiprocate when it’s needed.

So, Iya Bolu sells bread and Iya Kemi sells beans. They team up to make sales together. At first it wasn’t easy as Iya Bolu is already used to doing her thing Solo, she already knows how to cut corners and get to her customers fast; but then, she noticed that most times she doesn’t finish selling all her bread. Hence, she welcomed the idea.

On the other hand, Iya Kemi’s beans popularly known as “Ewagoyin” is top notch…and its aroma was so fine that by the time she’s done cooking customers have already started patronizing her. She also noticed that sometimes her customers decline buying from her because they couldn’t get a bread around to go with the beans. So, she too loved the “Combo idea” instantly.

Now both are making sales and they’re supporting each other to achieve success, and if you ask me, I will say, this is what everyone should have in Life, real SUPPORT that complements & Boost one’s Growth.

Now when an outsider see this Combo, without an inward look, they would think it’s just PERFECT…. But no. It’s the dedication of both Individuals that makes it work. Sometimes, Iya Bolu will get a Customer who just wants to buy Bread alone, she will stylishly convinced them to add beans too.. she says ‘Brother e Shey je pelu Ewa ko ba le yo yin dada?”…and they comply.
Occasionally, Iya Bolu gets angry too because Iya Kemi walks faster than her and she finds herself struggling to catch up… but all in all, they support each other and cover up each other’s flaws.

Just like the Title of this write up, I will say it again. Be it in Business, Family affairs, Sports, Education or whatever it is, Dear Friend, Follow those who SUPPORT you, work hand in hand with them and SUCCESS will be yours. Thank you.