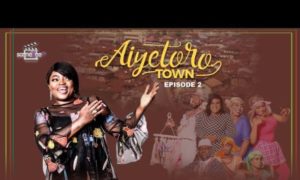 The  second episode of Funke Akindele‘s comedy series ‘Aiyetoro Town‘ is out and it will keep you glued to your screen and get you laughing.

In this episode, the Baale, in a bid to force the villagers of Aiyetoro town to learn to speak English, assigns a task-force to get hold of everyone who violates the rules.