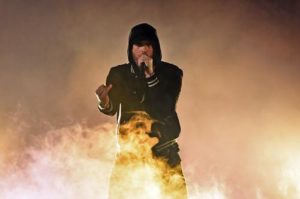 Eminem is also reportedly contributing to the WWE 2K20 soundtrack as part of the deal.

Eminem’s still riding the wave of his latest album Kamikaze which arrived at the tail end of the summer last year. Since then, he’s been doing a ton of shows overseas, engaged in a rap beef with his mini-me, MGK, was recently the focal point of a new POV documentary titled, Marshall From Detroit, and now, it looks like he has some major things planned for the World Wrestling Entertainment league

WWE has constantly shown love for the hip-hop community over the years. According to Fightful, Eminem’s about to be much more involved with the WWE this year. The rapper is set to contribute to the WWE 2K20 soundtrack later this year. However, he’s also gearing up to make an appearance in an episode of WWE Smackdown later this year. The rapper and the company reached a deal earlier today which was partially motivated to help promote WWE Smackdown Live on the Fox network. The company’s also planning on having a custom championship belt made for Em, as well.

Eminem isn’t the first rapper to appear on WWE Smackdown. Snoop Dogg, Diddy and Rick Ross have made appearances in the WWE in the past. Additionally, several of Eminem’s foes have also made cameos including Limp Bizkit, Machine Gun Kelly, and Insane Clown Posse.

Keep your eyes peeled for more information on Eminem’s new deal with WWE.