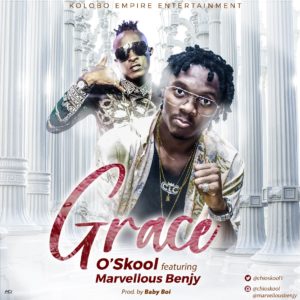 Maduabuchi Kingsley Chinonso porpularly known as O’Skool is a graduate of Lagos State University, from the department of Theatre Arts and Music. O’Skool is one blend of unique, consistent, and a rising act to lookout for in today’s music industry, in Nigeria.

Ever since the release of his “KOLOBO” which trended at a stretch and a music video which made his lovers call him the KOLOBO KING, O’skool has shown no weary nor is slowing down. Few months after Kolobo, he followed with another release titled “BIG DADDY” featuring Xbusta and Durella, the song till date still enjoys airplay on radio stations amid requests.

O’skool is here again with a new joint titled “GRACE”, featuring the legendary king of dancehall Marvellous Benjy, and produced by the beat sorcerer, Babyboi, you can not avoid listening to this jam.

The song GRACE according to O’Skool is a refined konto, a song anyone can relate with, telling God what you want because God is the only answer, abi no be God???

O’skool has proved himself to be a consistent as he would always give us something to vibe to, the dude is very much talented, educated and energetic when it comes to performance, watch out for him.

He is also active on social media @chioskool on IG and @chioskool1 on twitter, follow O’skool for more details. As he likes to say, #SoundIt !!