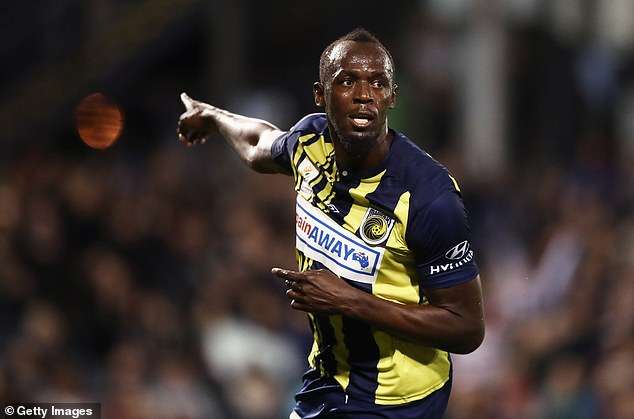 Usain Bolts professional career has finally taken off as he found the back of the net twice for Central Coast Mariners.

World sprint record holder Usain Bolt has finally found the back of his net for his Australian club side Central Coast Mariners as he recorded two goals against Macarthur South West United in Sydney.

The former Athletics champion showed off his blistering pace to overcome opposing defenders and slot the ball past the goalkeeper to score his first professional goal.

Bolt did not hesitate to give the supporters his trademark lightning bolt pose which he has used on several occasions on the track.

The 32-year-old was not on target as his side produced a two goal cushion before halftime but got on the act in the 57th minute and completed his brace in the 68th minute before he was substituted in the 75th minute.

Speaking after the game Bolt stated that he is delighted to have scored his first career goals and assured supporters that his best is yet to come.

He said, “My first start and scoring two goals, it’s a good feeling. I’m happy I could come here and show the world I’m improving.

“I’m keen to be a Mariner, to play my best and get into the team.”

Bolt retired from Athletics last year and has stated that is on his part to become a professional footballer.

The multiple Olympic Gold medal winner is set to have a dominant stay in the Australian league after he passed his trial.

He is expected to return to action when he Mariners face Brisbane Roar in their next A-League fixture scheduled for Sunday, October 21.